Found rat laying on her side, could barely walk, stable now but no diagnosis

Hi everyone. I took my rat to the vet last night after an incident but the vet did not have a clear idea of what had happened. Please read this, and if your rat has had similar symptoms and you have any other information that you think could help me or that I could pass along to my vet, please let me know.

Last night I came in to find my 21 month old rat, Boba, laying on her side, which she never has done before. I picked her up and she was limp, but tensed up a few seconds later to climb onto my shoulder then down onto my bed. She started to walk, very wobbly, almost picking up one of her legs and not using it, and when she peed, her urine was bright yellow. I took her to the emergency vet immediately, and when we got there, the vet said she was acting fine. The vet said she was mentally aware, walking normally (though slowly), and curious. She said the problem could potentially be related to the liver, though this was unlikely as the pigment secreted by the liver when it malfunctions would have not only turned her urine yellow but also her skin, eyes, and gums. She said there was a small potential for a brain tumor, though unlikely. She also said stroke was unlikely because of how she was acting fine now. The vet assistant calculated her weight and said she'd lost 20g in the last week. I monitored her all night and the only things I noticed different than usual were she was eating a little less and her sides seemed caved in significantly more than they were even the night before.

Some backstory: Boba had surgery to remove an abscess on her abdomen two weeks ago. I flush it twice per day with a mixture of iodine and water and give her Clavamox orally twice per day as well. Yesterday morning, probably at least 10 hours before the episode, her abscess was very full of pus at the time I drained and flushed it. I called the vet today that did her surgery, and she also said a brain tumor, or a pituitary tumor, was a possibility, as was a seizure, and finally, a stroke. She said that any time an abscess is drained it released small blood clots, and though highly unlikely, it is possible that one went to her brain or lungs and caused a small stroke. However, she really did not have an answer and blood work is the next step, though I'm nervous to put Boba under anesthesia for the blood work after what just happened. As for weight loss, the vet said said the Clavamox can upset rats' tummies, so she prescribed Emeraid Omnivore today to help her gain the weight back.

Boba's only other health issues have been ongoing mycoplasma symptoms that subside for long periods of time, then show up again, but subside with medication, though she has constant porphyrin around her right eye that I treat with Genteal eye drops. Her sister, who lives in the same cage, has only shown symptoms of a mycoplasma infection one time, and her only real symptom was lethargy that went away with antibiotics. The only other thing I can think of is that the air conditioning is out in my house, so the temperature went up to 80 degrees Fahrenheit last night, but the vet assistant said only over 100 would have been a problem.

Can you get us a video of your lass?

If she seems dizzy and keeping low to the ground there is also a possibility of inner ear infection.

Can you also get us pics of the abscess you are dealing with?
A 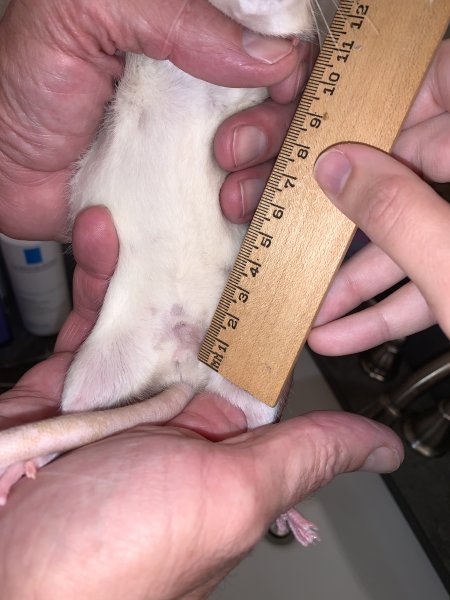 Here’s a picture from a couple days ago. It’s definitely shrinking, but a lot of puss comes out each time we drain it.

As far as a video, she’s resting now but if she gets up and I see the behavior again, I’ll post a video.

update...I took Boba back to the emergency vet today when she seemed to be having another episode. A different vet saw her, and said it seems like she’s uncomfortable. She said this would explain lying on her side, favoring her leg when she was having trouble walking, and a new development: squeaking when touched, mostly when startled or when touched near her back half. Both episodes of uncharacteristic behavior were after draining a very full abscess earlier in the day, so if it is pain, that would make sense too. Vet said Boba squealed only when touching knee and above, as she moved up the leg closer to the abscess. I was not in the room because of new policies from Coronavirus. The vet started her on meloxicam again, which she had been off for a week. She also did laser therapy to promote healing, and we’ll go back in for three more rounds over the next two weeks. The vet also said if the laser therapy doesn’t help, Boba may need another surgery to completely remove all abscess tissue as some tissue might be diseased and preventing healing.
You must log in or register to reply here.
Share:
Facebook Twitter Reddit Pinterest Tumblr WhatsApp Email Link