Hi all. Our little Oscar has been scratching himself pretty deeply, and causing abrasions/sores. I've included a pic below. He's not doing it super frequently, but it is too often and he really goes after himself. He started about 6 weeks ago, and we took him to our usual dog vet. They didn't find any evidence of mites, but we tried the 2 rounds of Revolution. No help. We have an appointment at an exotics vet on Sunday, but I'm hoping to get some advice and at least be able to ask the right questions.

-Oscar turned 2 a couple of weeks ago. His brother Felix developed a big tumour and was PTS about a month before that. Oscar's been living alone since.
-His behaviour seemed pretty good after Felix died, but lately he's been acting a bit different. Nothing too radical, but just not quite himself.
-Today we think we felt a couple of tumours in his abdomen. First time we noticed, and we handle him quite often.
-He gets lots of stimulation and love, and gets the run of the house for a few hours a day.
-I think his diet is good, and not too rich in protein. He wasn't eating his Oxbow for a little while after Felix died, but does eat some now. He also gets quite a bit of fresh veg. He used to love carrots, but stopped eating them completely (outright refusing to take it) a month or so ago. Still loves his lettuce and banana, though.
-We've tried some oatmeal baths, but ended up doing a half-baked job as he really didn't like it and we felt we were stressing him out.
-In recent days, he's sometimes squealed while he's scratching himself aggressively.
-His cage is lined with fleece. We keep it pretty clean. For the last few weeks, I've double washed the fleece, the second time without soap.

These were my first rats, so I don't have a lot of experience, but to me it kind of feels like a mental issue or discomfort from burgeoning tumours that are causing him to do this, and not simply skin irritation. Does anyone have any tips, or things I should check into, or questions or concerns I should raise with the vet?

Thanks for your time!

Here's a pic of sweet, sweet little Oscar. There's a couple of sores like this. 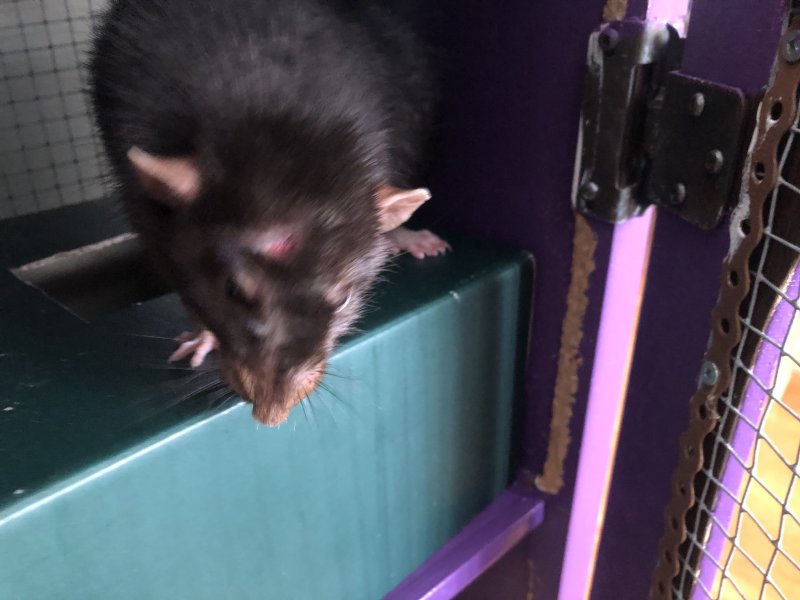 Well, we're not vets and can't really diagnose but that wound on his head looks pretty nasty. Best wait for the exotic vet to tell you something.

Can you get more pics of his sores? Closeup if possible? It may be a bacterial skin infection called pyoderma and you would need antibiotics and NSAIDs like Metacam for pain/inflammation. I have pics of classic lesions if you need to compare.
T

I'll see if I can get another picture later -- the little guy is resting in his box.

The wound on his head is a fair bit bigger, as he has kept going after it. There is another wound on his back, but it's pretty much just the two of them. They don't look like the typical images that came up when one googles 'pyoderma rat' or something to that effect (not as pussy). They are more like what would would expected after a vicious scratch.

Yesterday, the vet prescribed Sulfatrim and Metacam, and also suggested to keep using the ointment (BNP Neomycin and Polymyxin...) that the earlier vet gave us. He also trimmed his nails. He seems knowledgable (to my untrained ears), and has had many rats as pets.

Thanks for your help.

Well that sounds good that he has experience with rats. So yes, he gave him antibiotics and pain meds. Let us know how it's all going.
T

Update: We saw the vet on Sunday, and have been treating him with Sulfatrim and Metacam since (and treating his wounds with the ointment). There doesn't appear to be much improvement. Despite how awful the wound on the top of his head looks, I don't think he's reopened it in a few days. But he's really carving himself up still. We will continue with the treatments, but I'm just checking in to see if anybody has any suggestions, or can give insight into the head shakes we see in the video. He does that quite often. Pic last night, video this morning.

I can't help but feel that the little guy is losing his mind a little after losing his brother last month. This pair of rats was my first, so I don't have any other experience with rat behaviour. His behaviour isn't *that* strange, and he does like to eat, ride our shoulders, check out the house during free range time, get some cuddles on the lap etc., but he doesn't seem quite right.

Pic of Osc eating his peas: 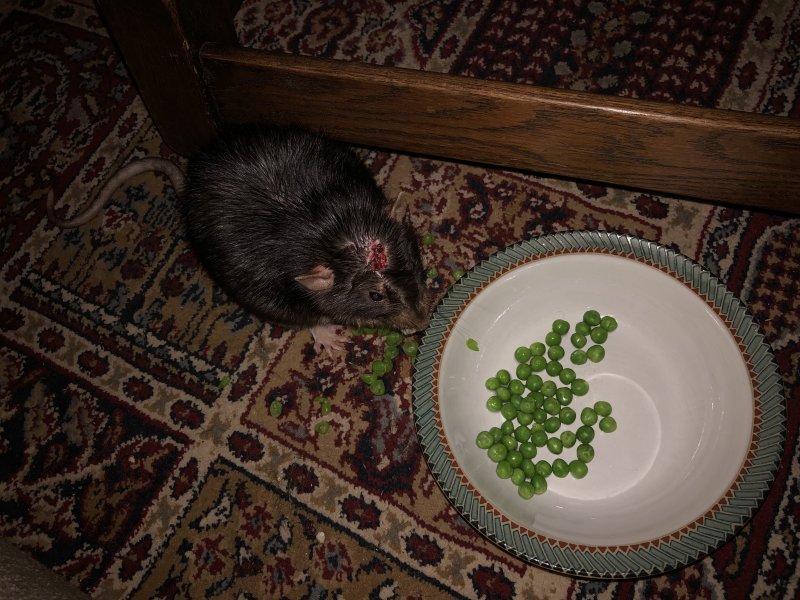 Thanks for any insight or advice!

Lets double-check the Metacam dosage. How much does he weigh, what concentration is the Metacam (1.5 mg/ml or 0.5 mg/ml) and how much are you supposed to give?

The head shaking is a rat-thing, possibly a bit of itchies.
T

Thanks for the info lilspaz68. The Metacam concentration is 1.5 mg/ml, the dose is 0.2 ml/day. I'm working from memory on the weight the vet listed, but I'm confident it was ~640 g.

Does he still scratch or rub at the lesions? If it's a bacterial skin infection you would need to start with high doses of Metacam (you could safely double it) then bring it down in 3-4 days to 0.2 ml
T

Sad update: Oscar died in the night last night. Not much to go on -- he was simply gone in the morning. He spent his last evening happily eating treats, getting cuddles and face scratches, and chewing through our telephone cord.

You are deeply loved and will not be forgotten, ya little meeper.

I very much appreciate the help I've gotten on this forum, as we tried to do our best for our little Felix and Oscar in their failing health. Thanks to all.

So sad to hear about Oscar. Poor little man. RIP. It's so hard losing a rat.