My little guy has two lumps on his neck, they appeared literally overnight. There are two, but not symmetrically situated- the other side has none. They are firm and do not really move around under the skin. There seems to be no discomfort from them.

This is the same one who previously had chirping hiccup fits lasting a minute or so every day. (I posted a video here.) Thinking it was myco I gave him antibiotics, but they had no effect.

Now lately he has also been breathing very rapidly, between 145-160 brpm.

With the appearance of these lumps, which I would assume is swollen lymph nodes, would this indicate lung cancer?

His breathing is silent to my ears but I have attached a stethoscope recording that may or may not help. 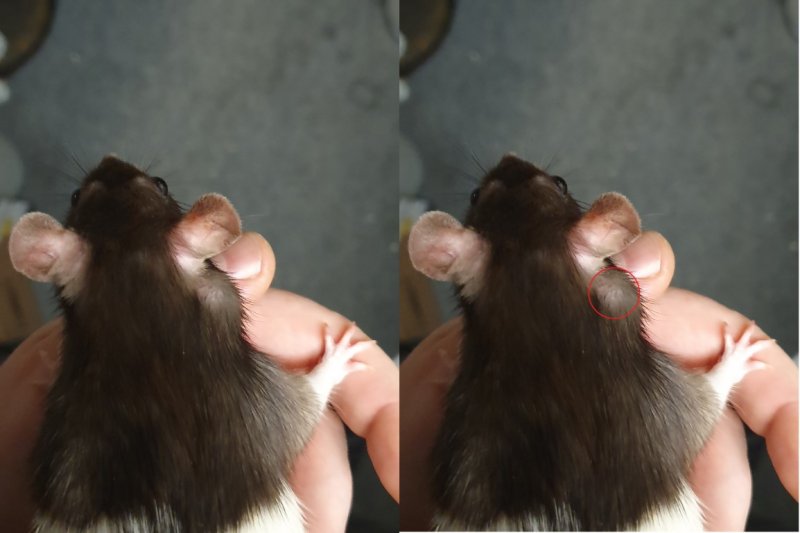 Could be a bite wound that abscessed since there's 2

There are no wounds visible and no other animals around to bite. Except maybe spiders.

How would I determine which it is?

Don't lymph nodes respond to infections on the corresponding side of the body?

the bottom one is more suspicious of the location of an SDA lump in the middle of the throat but with 2 lumps I would take it as something internal instead. I assume you've had her all her life and she doesn't live with anyone? Can you smelll her mouth to make sure there's no infected teeth issues causing these? Are they hard, immovable, soft, painful?

Yes, all her life; lived alone since last month. Mouth looks fine, although she will not let me inspect her back teeth. I can try with the scope later but there is definitely no smell.

Wouldn't the chirping and the fast breathing indicate lung issues? Like a tumor is taking up lung space, resulting in less oxygen per breath?

That just sounds like respiratory issues.
Was she with someone aggressive or feisty a month ago? I had a young girl take over a month for her bite abscesses to develop.

rmn34 said:
There are no wounds visible and no other animals around to bite. Except maybe spiders.
Click to expand...

the lump on the underneath of the chin looks exactly like something that one of mine had when he was young.

I was told it was either an abscess or a cyst. The Vet said if it didn’t resolve with meds they would have to do a needle aspiration to see what it was.

After a course of some antibiotics it disappeared and didn’t open up and drain like other abscesses have so I’m guessing it was a cyst. The vet said that the scratch or bite quite often heals before abscess is noticed or develops so there’s no visible entry so it’s definitely possible that it’s an abscess from a wound of some kind. The fact there are 2 as lilspaz has said could indicate a bite.

my boy was also chirping and treated for a uri as well. the vet explained that as he was probably fighting the infection in his neck it probably caused a myco flare.

@lilspaz68 no, her cagemate could not even walk due to the PT, I would not characterize her as feisty even when younger. Their whole lives they would get into little squabbles every few weeks or so, lasting a few seconds, then one would submit, and it would be over quickly. They never drew blood. I don't recall one recently.

In a previous thread, regarding the chirping, you said "it might not be an active infection that your antibiotics can attack. Hmmm"

Thereafter I had stopped the antibiotics and the chirping/hiccups was replaced with sneezing and silent hiccups. I did not notice the fast breathing until after the antibiotics had stopped. I am worried that I have a resistant strain of infection

@Narf the odd thing is that they seem pretty far apart for a bite, if you are intimating that each lump is the result of a puncture wound... I can't imagine how her sister would have opened her jaw that wide, especially in her weakened state

Nasal congestion is often not an infection so there's no bacteria for antibiotics to attack. That was one possibility.

Rat teeth spread far apart with a serious bite,I've got the scars to prove it lol. Little Maggie had multiple abscesses from a bite wound, one under her throat, one up near her jaw. If the old lass with PT had a seizure she couldve bitten down unknowingly. But no matter how she got the lumps I would try damp compresses to see if it's an abscess and you can get it to surface and open up.

The vet prescribed clavamox. I started him on that, but now I could swear his breathing is getting worse (possibly from stopping the zithro/baytril).

So what about Baytril, Azithromycin and Clavamox together?

The thing is I dont know which of the Baytril or Azithromycin was helping him...

While it certainly wasn't curing this, it was I think keeping it from getting worse. In the last few days since he has been on Clavamox only I swear I can hear more congestion, and his rate of breathing is higher today than before.

The only way to truly find out is to aspirate it and send for culture, or if it's an abcess, you'll know right away,

that trio of antibiotics should work together. I'm sorry you are having to throw the kitchen sink at your rat

I also started him on the nebulizer yesterday. Unlike my last one- he really hates it. First I tried to just hold him in my lap and keep the stream of vapor pointed at him, but I think the sound it makes scares him. Do you have any tips for keeping them calm for 15 minutes?
You must log in or register to reply here.

W
Large lump on my rat's throat? Abscess or tumor?

Pulmonary abscesses due to possible aspiration during surgery