Hello! Hope everyone is safe and is doing well
Would like some advice and/or thoughts on some unusual behaviour that my rat has been displaying I've already booked a vet appointment for Monday but I'm hoping to see if anyone has any experience with this and offer advise for anything I could do to help him feel better meanwhile.

My boy is a rescue rat, 1 year and 2 months old now and has been suffering from respiratory issues on and off for the past 5 months. Recently (past 2 days), he's become very lethargic, is constantly slouched over, barely moving but thankfully still grooming and somehow his face looks larger?? It's almost like he gained alot of weight on his face overnight but there are no visible lumps or bumps. He barely eats his regular feed and I've been feeding him Ensure in hopes that he's getting enough calories and liquid. He is also frequently bruxing on his right side and constantly nibbling and pulling on a towel that he sleeps on. The tugging isn't the playful kind of tug rats normally do... it's very short and repetitive. Already I tried looking for issues with his molars but couldn't find any (or maybe I'm just too inexperienced).

Other things noted would be that his fur does feel sort of rough and that he's constantly squinting.

And regarding his respiratory issue he actually doesn't wheeze as much as he used to but if he did make noises it sounds lower and more gurgly than it used to. He is still on antibiotics and has been for about the past week.

Sorry for the long wall of text. I tried googling and looking through forums but couldn't find a clue as to what might've happened to him... Any advice or insight will be appreciated! 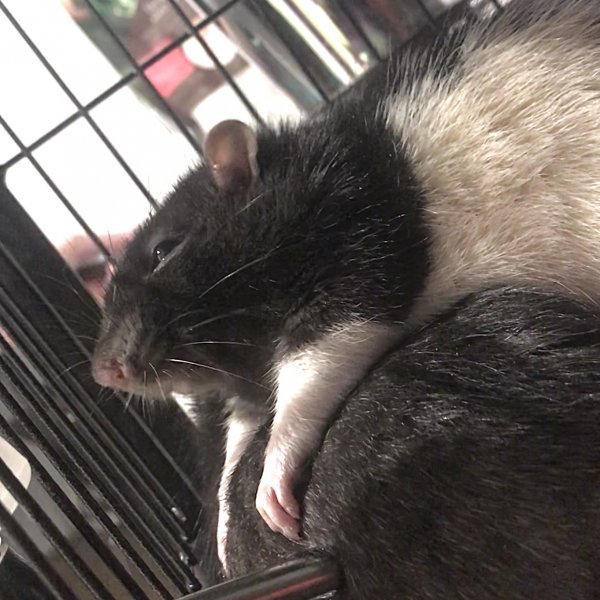 Face swollen? Repetitive behaviors? Sounds to me like his sinuses have swollen up so much they might be putting pressure on his brain. Rough fur and squinting are signs of distress- your rat sounds like his infection has gotten worse, and he might need to switch to a different antibiotic or a higher dose. Take him back to the vet if you can!

In the meantime, make sure to keep offering easy to eat foods with high water content. Try giving him a steam treatment, might help clear out his sinuses a little.

The way he's lying in that picture looks neurological. Is the 14 months of age a bit of a guess or do you know when he was born?

Can you offer your boy a small light treat like a cheerio and see if he can grasp equally or at all with his front paws. See my article on failing the cheerio test

This is Calla and she was fine one day, then she seemed floppy and uncoordinated the next. She shows us a lovely pictoral sequence of "faili...

Thank you for the responses!! I did try the cheerio test and he held it just fine! In fact he happily ate the whole cheerio and that’s the most I’ve seen him eat all weekend

He’s still at the vet but updating the thread just in case it might be useful for any one later on: We found that it’s probably a lump on the right side of his face that’s causing him all the discomfort. In other words his face wasn’t swollen it was an actual growth.... The vet will be sedating him to try to investigate inside his mouth to figure out if it’s possibly an abscess or maybe a dental issue and get the correct treatment. If it’s neither though it’s highly likely that it’s a tumor and it being so close to his face makes it a worse case scenario apparently.... I sincerely hope that it’s just an abscess that will go away soon....