So a while back one of my female rats died from mammory cancer, then five days later her 8 month old son Roly-Poly died. They were not kept together. The son had a cold, but was recovering when he suddenly died. I assumed it was a complication with the cold.

A week ago I found a lump on my rat Piglet who is 14 months old. She has never bred and she is kinda deformed. Her backlegs are kinda messed up. She was the runt and her mother refused to nurse her so I bottle fed her. Her mother is 3 years old and also has mammory cancer.

I took both Piglet and her mom, Blackie, to the vet. Vet said to just let Blackie go until she cant go anymore and then have her put down. Piglets lump was not cancer, but an umbilical hernia. Vet gave me antibiotics to give Piglet in preparation for surgery.

Her surgery is Thursday. She died last night.

I always triple checked the antibiotic dosages, so I dont believe it was an overdose, specially since she has been on them for about 5 days now.

She was acting fine the night before, playing and such. She lives in a one level cage because her back legs sometimes don't work and she cant climb very well, so I dont believe she fell or injured herself. She has no physical wounds. She just curled up and died.

Any ideas what happened? 3 rats have died in as many weeks! One I had put down from mammory cancer, but Poly and Piglet were young. And Piglet seemed healthy beforehand.

How are you keeping your rats? What are you feeding them? Are you using air fresheners or anything like that?

At first I would have said it was just a fluke, but with three weeks in three rats, I suspect there may be something in their environment affecting them. Give as many details as possible so we can help and prevent more deaths!

Kept in cages with paper bedding. No air fresheners or anything. Feed them rat food with wild bird seed. Every other day they get lettuce and once a month a treat of dog food. They're in a room with good ventilation kept at 70*f. There's a window they can see out. Across the room from them is my tortoises and the cat litterbox is in the same room in an enclosed container. Females are kept apart from males but can see each other. Not sure what else there is to say.

This is definitely a concern. I doubt food is a factor unless your food is moldy. I would not do bird seeds at all for them. I would find Oxbow rat food and feed them that along with veggies like broccoli, kale, carrots. The good stuff.

Went to the vet and got a necropsy done. Poly had pneumonia that hit quick and hard. Piglet is another matter all together. I knew she was never healthy, but now I know by how much.

She had:
Lung cancer
Uterus infection
Blood clot in heart
Muscular dystrophy in legs
Scar tissue in legs, her back leg muscles were black!
Hernia
Some organs were just odd.

Vet said she was just born put together wrong. That even if the uterus infection hadn't killed her, she wouldn't have made it more than a couple months.

Necropsies are so useful. That's how my vet learnt so much about rats. I used to get them all the time.
Poor little Piglet. At least you know you don't have some strange virus going around.

Thanks everyone for the help. Here's a picture of Piglet a few days before she passed. 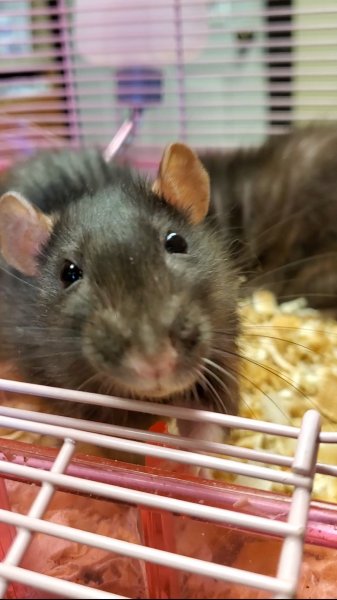 Emily said:
Thanks everyone for the help. Here's a picture of Piglet a few days before she passed.View attachment 13283
Click to expand...

What a precious and sweet little face

. I'm so sorry for your losses. Grieving can become complicated in situations like this where you don't know exactly what caused the deaths and the death was sudden. I'm so sorry but I hope that the necropsies helped ease some of the anxiety from the "what if's".

I'm so sorry about all of Piglet's ailments. I'm glad that it was just genetic abnormalities with her and not a virus that could hurt everyone else. It's still too bad that she passed away. She's in a better place now. It's good to know she lived as long as she did and with you

Absolutely stunning photo. That'd be my phone background if I were you lol. She looked like she was just about to start bruxing. That's the face Grumpy would give me right before he started an intense bruxing and boggling session in my arms.
You must log in or register to reply here.
Share:
Facebook Twitter Reddit Pinterest Tumblr WhatsApp Email Link