Guys, I have a dilemma. I think my rat has a Zymbal gland tumour but circumstances have made it difficult to be sure. I'll try to keep this brief:

Two and half weeks ago: tried to introduce a rescue rat into my group. Pearl got in a fight with him and got a scratch just inside of her ear.

Two weeks ago: noticed the area just underneath the ear was swolllen (pea sized). Found watery pus inside. Book vet appointment - administered baytril while I waited for the appointment.

One week ago: at vet appointment was told to keep up with the baytril and try to express the pus (lump already three times the size). Told if it's still bad in a week, they'd put her out and cut into it to express it. I tried to do this but the lump was hard, assumed pus was compacted, tried to use compress - no luck. Continued trying each day.

Two days ago: Pearl still eating and drinking, lump bigger again, still hard, ear still full of blood, 'pus' looks more like squiggly lumpy tissue. I decided to start giving her inflacam ontop of the baytril as I had some left over from another rat still in date.

Yesterday evening: Pearl's lump still huge, still hard, still filled with blood. I emailed the vet (was already shut) tomake sure they had all the information as was planning to ring in the morning to book her in for that surgery.

Today (4.30am): Things suddenly much worse, hole opened up in Pearl's face below her ear. Loads of that squiggly lumpy tissue that I thought was solidified pus at first. Tried to clean the area but the blood keeps coming and smell is back but a bit different. I've never been able to breathe 100% through my nose so my smell detection is not great but if I had to describe it I'd say it smells more necrotic than infected now. She screams and trembles when I try to clean it for too long. She's eating malt paste and drinking her water. I've emailed the vet to update them but I've now google images of Zymbal galnd tumours and fully suspect the vet's initial diagnosis was incorrect.The fact her ear wasinjured must have been the worlds worst coincidence and have muddled everything up.

I think the right course of action is to have her PTS the second the nearest walk-in vet opens. She's on 0.2ml of inflacam. Can I give her more? I've been mopping at her ear to stop her drowning on her own blood but I'm crying and trembling so I'm not doing a brilliant job. It seems to have coagulated a bit so I've put her back in with her buddied and they're all snuggled up. She's had her favourites treats and her pain meds. Is there anything else I can do for her in the long term.

Please could I have some experience opinions. ZGT? Or swelling due to a scratch in her ear? 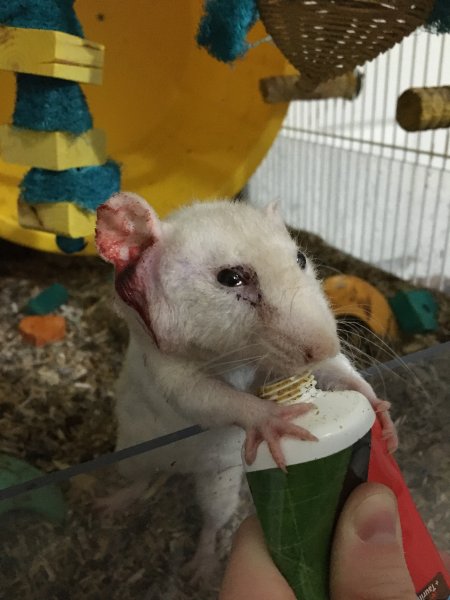 I am so very sorry that Pearl is going through this. She looks like a wonderful little girl.
Did you put her to sleep?

If not, and you have facebook you can post on Real Rat Lovers Want To Know, message Lilspaz68 on this site, or message Shelagh Hall on facebook (Lilspaz68). Lilspaz68 has a lot of experience/knowledge regarding Zymbal gland tumours. I messaged her about Pearl.