So a couple of weeks ago I went 5 hours (one way, 10 hr total) to pick up two rats, $25 each. I thought because she was reputable as a breeder for 7 years that I would get some decently ok genetic wise rats. I don't know if it's genetics or he's got super raging hormones already... He's about 7 or 8 months old, I know that hormones could pay a factor but he is in a new cage. As in it's not his cage. 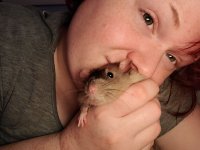 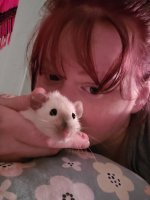 I did introduction between rambutan my naked rat, pasta one of the two new guys my Siamese rat, and meatball my other new guy Burmese rat. Meatball and pasta are brothers. RamBUtan was left without cage mates because he had started attacking (I guess not really attacking but power grooming and they didn't like it) his two older cage mates. One of which (Bean) has passed since then of old age, and the other (Cookie) one will be passing soon from the same. I was giving them antibiotics but they didn't respond much to the treatment. (Continuing to swiftly lose weight and become less interested in their regular food) 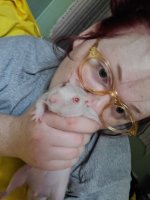 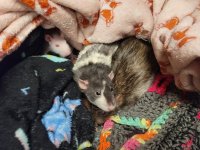 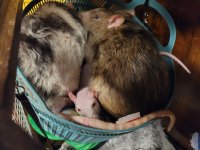 I had gotten these two babies, meatball and pasta, so Bu wouldn't be alone. I did slow introduction at first, bu was terrified of them and vice versa. They would run around trying to find a place to hide and he would scream every time they got close to him. Eventually the running stopped and the screaming lessend. I had them in a carrying case for introductions as a neutral ground. I call it the get along bag

I put them in the same cage together and they seemed okay for a bit until meatball started getting aggressive. I would have to break up scuffles at least once every couple of days, and I would find bite marks and slashes on my naked rat. I understand that without fur he is more susceptible to getting injured.


Unfortunately last night I had to separate Bu into a small recovery cage because meatball bit his nose. Pasta really doesn't have an issue with bu, it's just meatball. Meatball and pasta will have it out and be fine, but I think bu is scared because he is albino mostly blind. He's got light red eyes not necessarily pink though. I don't know what to do because neutering is $300. Yes I have a credit card I can put it on but I'm still paying off my cat's surgery, I'm absolutely terrified of them dying in surgery..

Which, by the way, I wish I had gotten my rat mochi neutered before, but same problem. Now mochi is two and has an ever-increasingly growing testicle tumor. I have to clean his peen twice a day of bloody discharge. I know I know I know don't come after me for not getting him fixed. People have different situations and I cry about it a lot because mochi is one of my heart rats and it's going to be torture losing him.

I know I took an oath too provide and protect for these babies and I love them and also I spent 10 hours in a car with my dad and husband and spent 50 bucks on these little buggers. So I can't just rehome them and leave rambutan alone because that would be unfair. Bu is a very good loving cuddly and sweet rat. I feel bad that his dads were much older and couldnt keep up with him. I realize now that I should have gotten another rat with him when I got him at the time but I already had four rats. Slowly my rat's number started dwindling because I lost two.


That's when I decided to get him some company that was his age. Maybe it was because he was raised by two old and loving rats that he turned out sweet. Maybe he had good genetics even though he was from a bad breeder. Who knows, all I know is he's getting attacked by the new guys in his own cage. I've tried cleaning the cage, I've tried putting stuff on them like yogurt, coconut oil, almond butter oil, an attempt to get them to lick each other but Bu gets scared every time the other rats are near him.

Ok I seriously got lost in your story, can you make a Cole's Notes version of it?

Who is the aggressor? Bites to the nose can be defensive bites. bites to the side, shoulders, rump and belly are definitely aggression.

As for Mocha, usually testicular tumours are enclosed in the testes and not very painful. Blood from his penis could mean a few things, a urinary tract infection or a genital myco flareup...both need antibiotics to cure.

As for mochi, I'm not sure if it's a testicular tumor because it goes all the way up into his abdomen starting at his testicle. Antibiotics are being given daily, doxyvet in the water and I have to trick him into eating his generic Baytril because he wouldn't even take it in the food he liked, I had to shove it in his mouth.


Cliff notes version of my story is I have a naked rat, he is about 8 months old. I had him before I got the twins. The twins are meatball and pasta.... Everyone was scared of each other at first as per usual, I did slow introduction in the "get along bag".. it's just a cat backpack really.


I've only had meatball and pasta for like a month and a half and they've settled in great but meatball started aggressing my naked boy. Because he's naked, marks are easier to find. He had some on his side, he has a bite mark on his face, and recently got bitten on the nose.... He was being chased around the cage by meatball after I heard a scuffle and found the nose bite.


Pasta is fine with rambutan my naked boy. But rambutan is mostly blind because he is a red eye. So he's scared of them getting in his face. He's too scared to be in his own cage currently. He was attacked in his own cage by the new guy meatball.

I hope that kind of shortened everything up a bit, if you need more clarification just let me know.

Rambutan has been in the recovery cage for a few days. I will start reintroduction asap, and take a LONG time introducing, because Bu gets really scared. I love my little rascals. Meatball especially loves to be tossed onto a pillow. He will run back to me for more!
You must log in or register to reply here.

M
Do I keep the new rat or not?