My rat has 2 different personalities.

He’s only 5 mths old. Last mth i had to separate him from his cage mate as he out of the blue started attacking him. I used to let him out to play with my other boys but i can’t now cause he bites everyone. I have been bitten by him 3 times now & he bites hard, draws blood. I don’t understand what is going on with him. Now i am forced to keep him isolated & i still let him out to play with me. At night i give him scratches through the bars & grooms all my fingers gently & bruxes...its when he’s let out of his cage that he turns from Jekyll to Hyde. At first we play & he’s so excited to be out, runs back & forth, lets me pet him n scratch him & hold him & eventually he turns into a terror.
He will suddenly start scuffling at me & starts trying to bite my hands i think he has mental illness issues, he’s so sweet one moment & then i don’t even recognize him when he turns into this psycho. I’m really upset, i have tried so many things trying to figure out why he’s like this & how i can make things better but i’m out of ideas. Nothing will fix the situation for good. He has his good moments, when he’s in the cage, & he always chews on the bars wanting out. But once he’s out, thats when his personality turns. Any thoughts anyone? 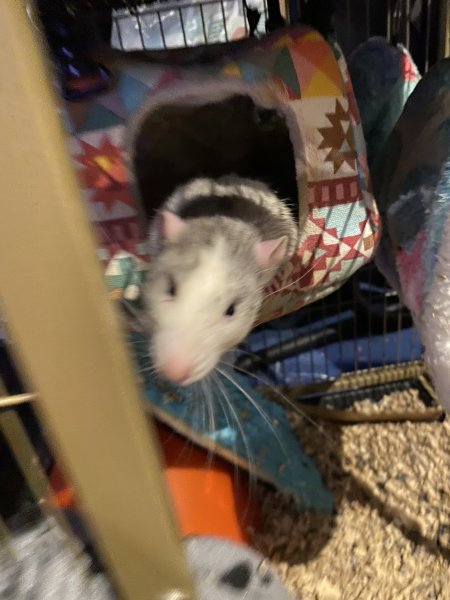 He's a classic boy going through hormones. Some boys are barely affected but your lad sounds like he has hormonal aggression. If you can afford it get him neutered ASAP and within a month you should have your sweet buddy back.
I wouldn't put your fingers near his mouth anymore though as he will likely continue to get worse.
The smell of other rats will set him off which is why he ramps up when out. Don't play with him anymore because certain things will make it worse, touching his rump or sides is similar to where another dominant male rat would bite/attack.
Do NOT let him run over any exposed flesh (arm leg) or even start licking you because the licking frenzy can quickly change to a nipping then biting frenzy. :/. IF you get bitten, stop the bleeding, take ibuprofen ASAP then clean and bandage your wound. I let my would bleed a little as that flushes out impurities then I've used a rubber band (finger bite is most common) as a short term tourniquet. The ibuprofen will help with pain, and the swelling which can cause even more pain and delay healing. I take in difficult rats including hormonal males so have dealt with this a lot.

Neuter is best if possible.

I want to add one thing. It's not your boys fault, he's not choosing to be this way..he's stressed out and unhappy being out of control. Neutered boys are wonderful.

Unfortunately i can’t afford it as i live on disability & $1200/mth is just not gonna go far, i checked with a clinic around here & they estimated it would be around $400-$500. I could afford it if it all came out to like $200 lol but beyond that i don’t have that kinda $. Do u know if Toronto humane society can provide the service? And no i’m not mad at him at all, he’s a sweetheart, i adore him, i’ve spent last few nights just crying my eyes out that i can’t help him, i can tell he’s frustrated & suffering. I know he doesn’t know what he’s doing, i would never ever blame him, my hearts just breaking for him. I can tell he misses his friends & he’s lonely & confused. I still play with him and risk being bit because i can’t bear to leave him all alone. But i did buy these mesh-metal gloves so i wear them now when i handle him & i wear long sleeves & cover all my skin. There is no chance his hormones will adjust with time? This was him with his buddy b4 when things were still good. 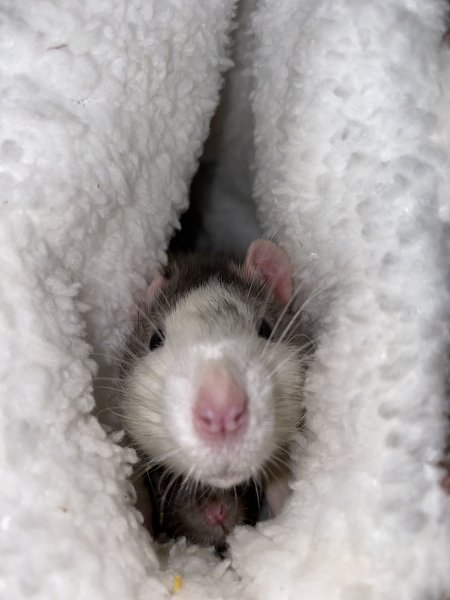 Ok the best thing to do is take him out in a completely neutral area...no other rats have been there. This will be where his Out time will be. Learn his triggers and don't play with him if he starts to get agitated. If he actually starts "hunting" you just leave and let him cool down. If he's a boy that ramps up into his rages then take him out and hold him, cuddle, kiss his back before putting him down. You'll figure out when he's started to ramp up then use a towel and put him back. The less chances he has to bite the better as then it won't become a habit. Some rats take awhile but the hormones can ebb in time and he'll end up better/ok but he may never be able to have rat friends.

I second the neuter. My normal vet was going to be $450 to do it, but I found out a vet from the Dallas zoo moved down by me, and I called the office he works at, and it was $209! When I went to pick him up, they were going to charge me almost $40 for metacam (which I had at home), and I told them I had only budgeted for $209, and that I had the meds, and they reduced the fee. It actually came to about $197 somehow! Then I decided to get my other boy done (it makes a big difference with attitudes, smell, and their fur, plus I could put them with my females), and his came out to be about $250 somehow, and I reminded them what I paid two weeks before, and they adjusted the price. My point is, call EVERY vet clinic. Not just exotic vet clinics. Some may have a Dr who works with exotics employed part time. Also, get in touch with a nearby rescue. Sometimes they can get you a better deal, or put you in touch with people who can help you with your situation. It's better for them to help you, than for you to dump the rat, then they have to deal with it, or work with him.

By playing, I think lilspaz may be referring to actually hand playing with him, where you wrestle him with your hand, or allow him to jump on you and romp with you. Maybe just give him lots of things to explore, or play with in his new area. Pet him on his nose, and give him little treats when he's being nice. When you see his fur puff up, or he sidles up to you (body bumping you, mostly with his rear-end), use the towel and put him up. If the towel doesn't work, use a box. Let him hop in, give treat, and transport quickly to his cage.

I literally went through the same exact thing! Couldn't afford to get him neutered, which I definitely regret because I know he has a testicle tumor

... So he has had to live on his own for the past year now. Don't get me wrong he loves all the attention he gets, and he's finally chilled out a bit because his testicle tumor I believe is probably painful. I was able to let him out with one of his old cagemates to walk around my bed for a bit. Because his old cage cookie is two and a half like mochi doesn't think of him as a threat so he can roam with cookie for a little bit while cookie still alive. Cookies going downhill fast but that's for a whole different post.


Stay away from his rump and figure out his triggers. For mochi, I couldn't scratch him past his mid-back, and he absolutely despised the sound of scratching paper together. I would have to completely remove him from the cage when cleaning it. He's drawn blood from me on many many occasions. . . But since he's old and in pain he's chilled out a bit!
You must log in or register to reply here.

A
Can I seperate my Bucks?

When to re-introduce neutered male?