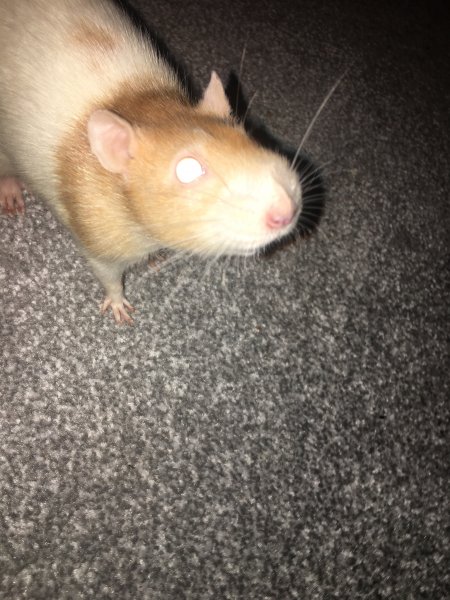 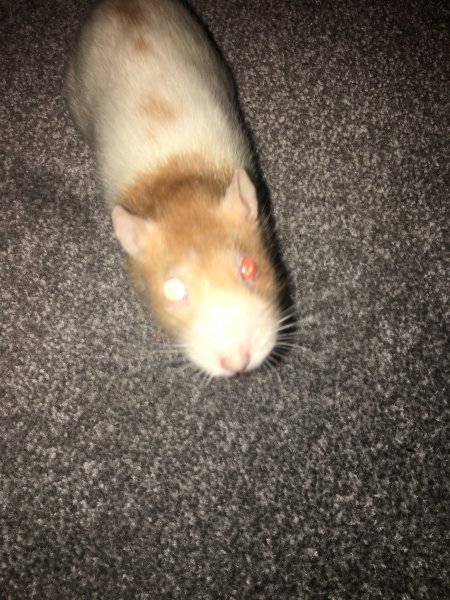 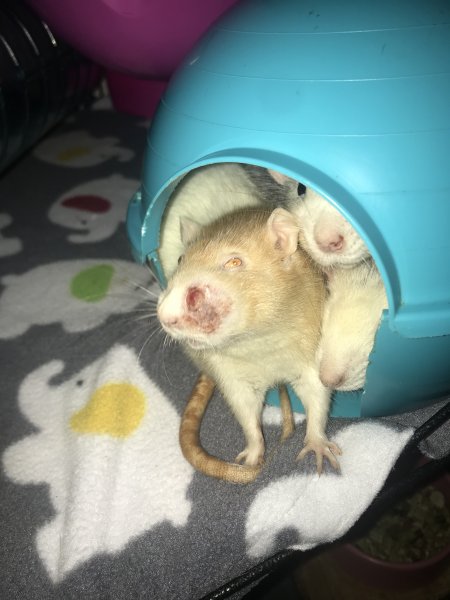 Hi all,
I have been reading these forums since discovering them a couple of years ago and they have helped me massively to understand and learn so many things about keeping rats, I never needed to post anything until now and hoping for some help/advice. One of our five rats, Rolo, had a lump on the side of his face/nose area appear a couple of weeks ago. We took him to the vets and he had an X-ray done, the vet released some of the pus that had built up and prescribed antibiotics (karidox or doxycycline) for the suspected abscess. He was on the antibiotics for a week but in that time the lump got much worse, grew at least double in size and started to turn purpley/red. Rolo also started to puff up his fur so was obviously in discomfort/pain. We took him back to the vets yesterday and were told that because of the quick growth, the redness, and hardness of the lump it was 95% likely to be a tumor not an abscess. Because of the size and the location the tumor can’t be removed as it’s so close to his eye, nose and mouth so his quality of life will deteriorate pretty quickly. The lump is already affecting his balance and ability to eat and his vision. So we got some metacam and some more antibiotics (Baytril this time as he hates doxy!!!!) to keep him comfortable and were planning to take him back in next week to be put to sleep. We don’t want to make him suffer unnecessarily for much longer and also it’s bad timing as we are going on holiday on Friday for 2 weeks so really need to make a decision before then. There is an option for us before him being PTS for him to be put under anaesthetic and the vet can open up the lump to make sure whether it definitely is a tumor or an abscess. If it is a tumor, then he would not be brought back around from the anaesthetic and would be PTS but if the 5% chance it is an abscess then it could be drained and he could be brought back around. However, since we brought him home last night the lump has now turned nasty, he must have been scratching at it and it now looks really sore and it has opened up almost like a crater in his face. There seems to be puss there too so I don’t know if this means it is an abscess?? Could this happen with a tumor?? Could it be a staph infection?? We have to make a decision about what to do pretty quickly before we go on holiday but I don’t want to rush into it and make the wrong one. Obviously we will be taking him back to the vets ASAP next week but in the meantime looking for anyone who has experience/advice on this? What can we do to keep him comfortable should we bathe the wound? He’s not puffed up with his fur anymore so although it looks really sore I don’t think he’s in pain. If it is an abcess then when drained will he recover fully and be back to normal? We are already having another of our boys, Jekyll, PTS on Tuesday as he has had pulmonary abscesses for a couple of months and is now starting to deteriorate more quickly, would be nice if they can both go together if needed but it will be a shock to go from 5 to 3
Will try to post some photos of the lump when it first appeared vs what it looks like now.
Ps sorry this is so long just wanted to give as much info as possible.

How old is he? Have you tried to clean it out daily with saline rinses? It should be about as salty as your tears. And antibiotics for more than a week will probably be necessary.

Dena said:
How old is he? Have you tried to clean it out daily with saline rinses? It should be about as salty as your tears. And antibiotics for more than a week will probably be necessary.
Click to expand...

We’re not sure as we adopted him and they didn’t know how old he was, we’ve had him for a year I would estimate about 18 months. Is it likely an abscess then? It’s only been like that as of today, before that it was just a lump not an open wound so we haven’t been cleaning it, will do that now

That poor little guy. I'm wondering if it's actually a tooth abscess, if it is, we have never been able to successfully treat a tooth abscess. The rats are in great pain with those. It's a hard decision. But if it doesn't get better with the baytril, then I'd say it's something more serious than a simple abscess.

The vet said that from the X-ray the tooth is healthy. He definitely seems happier since we got the metacam so that seems to be helping. Will keep going with metacam and Baytril and see what the vet says when we see him again on Tuesday. Is it worth also persisting with karidox together with the Baytril?

I would also continue with the saline rinses. You can do them several times a day, and it will help keep infection out as it heals.

Yes we have been doing this since Saturday the swelling seems to be reducing, it just looks so sore bless him.

If the baytril is not enough you might want to try something that like chloramphenicol palmitate (commercially available to vets in a liquid form and is not expensive) .... facial infections are very dangerous http://ratguide.com/meds/antimicrobial_agents/chloramphenicol.php

As a physician, it is unacceptable that the lump has not been biopsied! That should easily distinguish between an infection or a tumor!

I agree! If it was already being lanced, they could have taken fluid, or whatever material came from it and Done a smear and looked at it right then. At least it would have given a direction of treatment. It's just odd..... But hopefully your baby heals, and starts to feel better soon!

It could be an abscess, tumor, or both
You must log in or register to reply here.

I
abscess about to burst(??

W
Possible tumor in mouth, what do I do?

A
Mass on body