about 5 days ago, i introduced my current rats (gumby and pokey, 5 months old) to recently adopted new rats (smokey and baloo, also 5 months old). i started off slow but the new boys are neutered so they submitted very quickly, and they've been able to sleep and eat together just fine. gumby seems to try and pick a fight sometimes, but not excessively. he'll sometimes do that thing where rats back up to the other rat using their side as a shield and puff up. he seems to only do this to the bigger new rat, smokey, who is a show rat and is massive (already 1 pound at 5 months old) but still neutered so he doesn't fight back. i didn't think anything was really wrong until today.

two days ago, i noticed a little tiny hard part of his coat around the side/underneath of his neck and found a scab. he was being extra wiggly and didn't want to sit still. so i didn't inspect it because i couldn't feel any mass under the skin and i assumed it was a little sebaceous cyst i could look at later. yesterday, it was bigger and felt noticably extended under the skin, and produced a little drop of pus when squeezed gently. i cleaned the area and clipped his fur away from it, assuming it was a small bite. i checked it today, and it was less swollen, but pus again came out from under the scab when squeezed gently. i cleaned it out again very thoroughly and it didn't seem to bother him (he had treats while i did this and sat still). i felt around the opening and it still feels like there is a lump inside that extends towards below his ear. the inside of the hole is not deep and looks a bit yellow, but i checked and it's not pus. it looks like the bottom of the opening is fatty and connected to the lump (swelling?)

he is only 5 months old...... he's never had any other health issues. does this sound like a zymbal's gland tumor or an infected bite? it can't be coincidence that the week new boys are introduced, he ends up with a sudden lump and scab. should i start him on amoxicillin since there is pus?

the attached photo is more for showing the location, not really detail (it's hard to get him to sit still). if a detailed photo is needed i can get another one. 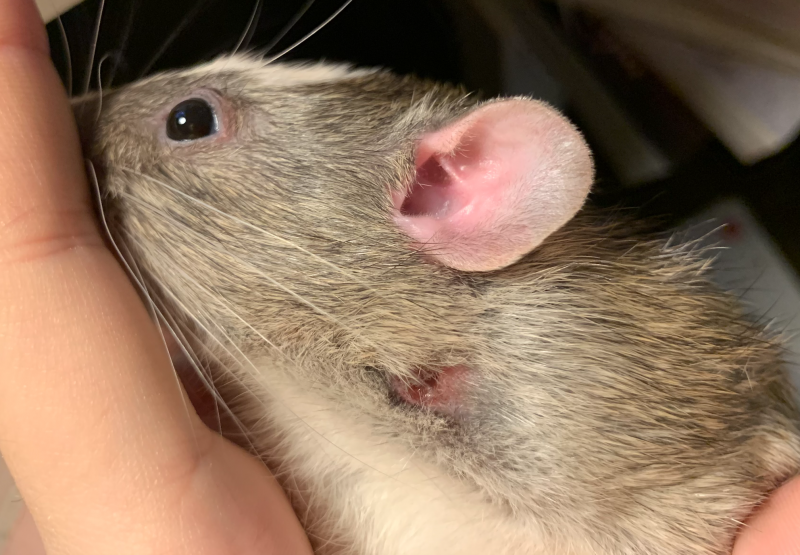 Because of his age I'd say it's more likely he got in a small tussle when you weren't there, got a small wound that healed on the surface quickly and trapped infection inside, the bump you're feeling could be puss but it can also just be swelling, I'd say keep flushing it, Metacam if you have it, and if he willingly takes antibiotics then they wouldn't hurt but if he doesn't I wouldn't force them

Kye said:
Because of his age I'd say it's more likely he got in a small tussle when you weren't there, got a small wound that healed on the surface quickly and trapped infection inside, the bump you're feeling could be puss but it can also just be swelling, I'd say keep flushing it, Metacam if you have it, and if he willingly takes antibiotics then they wouldn't hurt but if he doesn't I wouldn't force them
Click to expand...

thank you. i will start him on some amoxicillin tonight just to be safe and give his body a helping hand, since it grew so quickly yesterday. i really hope it's just an abcess- i've left them unattended quite a few times while in the play area and it could have happened without me knowing or even hearing it. you know the rule, no blood no foul, and i never saw wounds so i was suprised to find the lump later. i'll keep this updated if it gets worse.

i checked today, and the opening on his neck is closed up with no infection- HOWEVER. suddenly there are MORE lumps with openings on his shoulder. about two, one bigger than the other. they appeared overnight. if i look inside the opening, it's yellow like the lump visible inside is fatty and hard. what is going on?????? there is no pus, just yellow lumps inside.

That is indeed very strange... I don't think I've ever heard of this before, could you try to get photos of it/a video ?

the lumps are thankfully not growing past the last time i posted. they are however remaining the same size and one of the new ones on his shoulder has opened up, i had to clean the bit of pus that came out and it was really thick and pasty, very weird looking. it doesn't smell infected (like really bad, you know the infected type of smell), and on the inside of the shoulder wound you can see yellow (fat?) that does not come out (not pus). gumby seems great, he doesn't feel warm, and acts like there's zero issue. i'm trying to keep it clean and dry. i started him on amoxicillin as well. 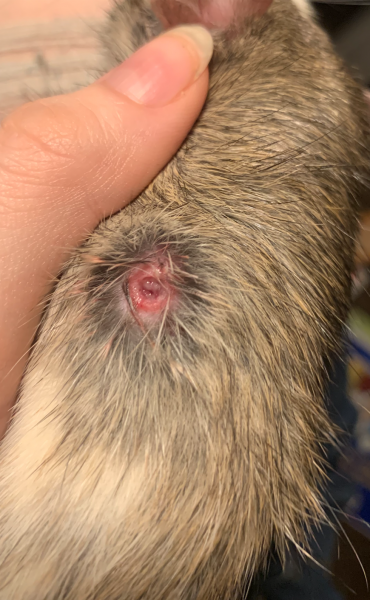 the other end of the original lump next to his ear has opened up, i'm assuming because the original opening scabbed over and there was still pus in a deeper area. i cleaned that as well. sorry if this second photo isn't as easy to see, he's a pretty wiggly and young rat so he doesn't like to sit still. there are no more lumps outside of the one on his ear, and two on the shoulder. the second shoulder lump has not "come to a head" and opened up yet. 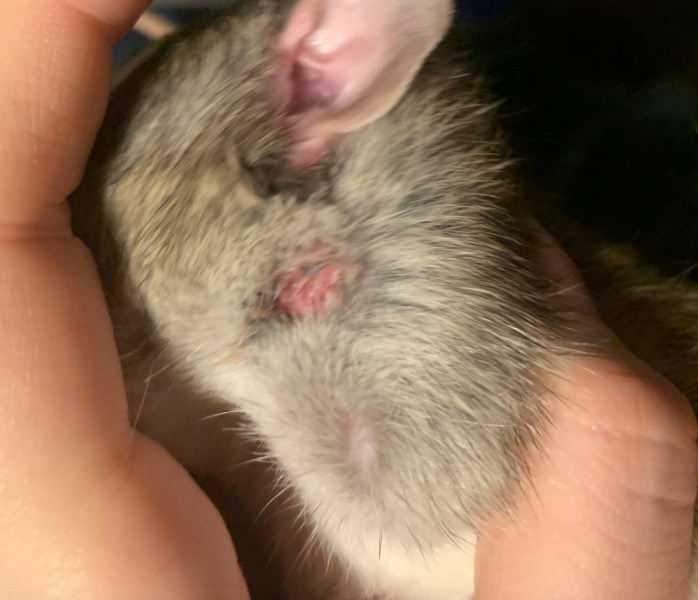